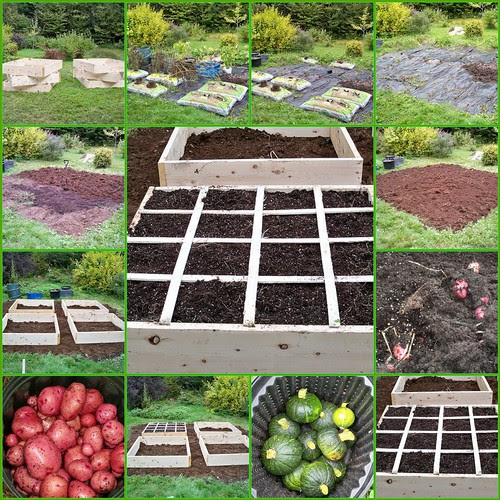 The day began with a visit to the hardware store to buy more nails so I could finish the last raised bed frame. After building the frame it was on to the 12 X 12 foot site where I hoped to be able to put all six frames. As I cleared the grow bags and removed the black plastic mulch from the area it became clear that if I put all six frames in this area it will be over crowded and very difficult to work around, so I decided to put only four frames in this area. The other two will be placed in another area where I already have a large raised bed. Since this new area will be the only area with a fence to keep the rabbits out I will need to remember to grow crops that the rabbits don't like in the two beds that will be outside the fence. This year the rabbits didn't bother the onions, tomatoes, potatoes and squash so I should be able to fill those beds with these crops.

I also harvested a nice crop of potatoes and squash from the containers and grow bags.

After I removed the plastic I spent a couple of hours with a garden spade tuning the soil over in the bed because it had become quite compacted from walking on it this summer. I was pleased to see that the sod that I had turned over in late spring had composted nicely.

I was able to fill one of the frames with the compost from the potato containers and one grow bag. I have nineteen grow bags left each containing eighty five liters of compost not sure if that is enough to fill the three remaining frames or not.

I divided the filled frame with cedar laths that I bought for this purpose. My square foot garden isn't divided into square feet however, for a couple of reasons, the inside dimensions of the frame ended up being 46 X 46 inches and also the width of the dividers take away from the growing space. Each section is 10.5 inches square.

Posted by Dale at 7:24 PM No comments: Links to this post