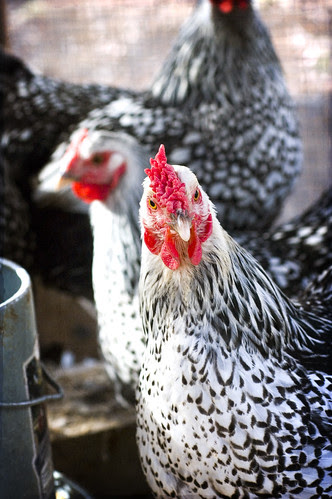 Well as soon as I get back home in April I plan to start building my Chicken coop and when it is finished I will place an order for day old chicks with Randall Burkey Company for five female and one male day old Silver Laced Wyandottes. I have considered many breeds and even thought for a while I might get a mixture of breeds but the more I think about it I want a large breed that is gentle and winter hardy so I've settled on the Wyandottes. The information below is quoted from Murrary McMurray hatchery I have ordered from them many times in the past but this time I only want a few birds and their minimum order is 25 birds.

The Silver Laced is the original Wyandotte and the other varieties were developed from it later with crosses on other breeds. It is an outstanding example of American poultry breeding ingenuity and is one of the most beautiful breeds we offer. It is colorful, hardy, and productive. The broadfeathered, smooth fitting plumage is sharply marked. The general appearance is silvery white and lustrous greenish black as each feather is edged in a contrasting color. The close-fitting rose comb and good body size are valuable assets for winter laying. Cold weather doesn't seem to bother them at all as their hardiness and vigor keep them laying straight through the winter. They lay a nicely shaped, good sized egg, varying from light to rich brown and will set some. This is another excellent variety for exhibition. Baby chicks vary from almost black to light silvery gray and many have contrasting light and dark stripes on the back.

A very nice new promotional video about Campobello.
Posted by Dale at 1:49 PM No comments:


A YouTube friend in Alabama and I exchanged seeds and she sent me two varieties of Chili Peppers. I planted these in the light garden some time ago and on January 11th started taking video clips to make this time lapse video.

The plant is a perennial, but usually grown as an annual, with a densely branched stem. The plant reaches 0.5–1.5 m (20–60 in). Single white flowers bear the fruit which is green when unripe, changing principally to red, although some varieties may ripen to other colors including brown and purple.

The green foliage is highlighted by purple veins and beautiful purple flowers. Sturdy plants grow 30-36" tall and produces 3-4" fruits similar in shape to a jalapeno, but black in color ripening to red.

While the species can tolerate most climates, they are especially productive in warm and dry climates.

Due to this climate tolerance, and the variety of flavors available, this New World plant spread across the world, possibly faster than any other crop.

The species is a source of popular sweet peppers and hot chili fruit, and numerous varieties are cultivated around the world. Despite being a single species, Capsicum annuum has many cultivars, with a variety of names. In American English it is commonly known as a chili pepper or bell pepper.

In British English, the sweet varieties are called peppers[3] and the hot varieties chillies[4], whereas in Australian and Indian English the name capsicum is commonly used for bell peppers exclusively and chilli is often used to encompass the hotter varieties.

Sweet peppers are very often used as a bulking agent in cheap ready made meals/take-away food. This is because they are cheap, have a strong flavour, and are colorful. The colorful aspect of peppers can increase the visual appeal of the food, making it more appetizing. However, foods containing peppers, especially chili peppers, often have a strong aftertaste. This is likely due to the presence of capsinoids in peppers. Also, capsaicin, a chemical found in chili peppers, creates a burning sensation once ingested. This sensation can last up to several hours after exposure. As a result, this can lead to a prolonged aftertaste
Posted by Dale at 1:04 PM 2 comments:

Look who is under my bird feeder this morning. 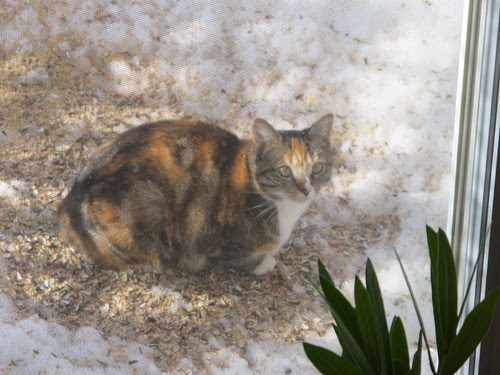 Look who is under my bird feeder this morning., originally uploaded by Campobello Island.

(Not a great photo taken through glass and a screen) This beautiful cat belongs to a neighbour but she visits frequently and she is a great hunter. A few years ago she killed a partridge on my property and returned for several days until she had eaten all of it. Never seems to have much luck at the bird feeder though, it's in the open and they see her coming. She is very shy I love cats and have tried to get close to her for years now but as soon as I speak to her she runs back home. 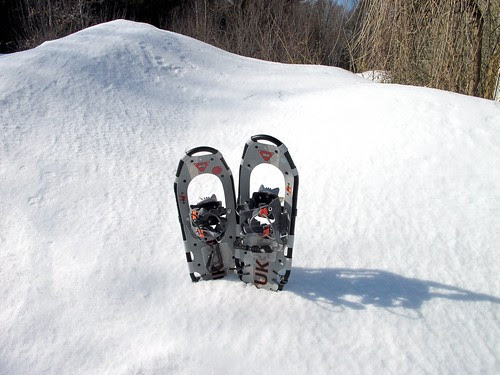 I've been waiting for almost two weeks for my new modern style snowshoes to arrive. Didn't get much of a chance to try them out today it was so cold and windy. I started walking around the golf course but the cold temperature combined with the high wind was just too much. They are nice and light and support me very well on the snow there is several feet on the ground and I was only sinking a few inches. Forecast is for better milder weather for the next few days so hopefully I will have a better chance to use them. 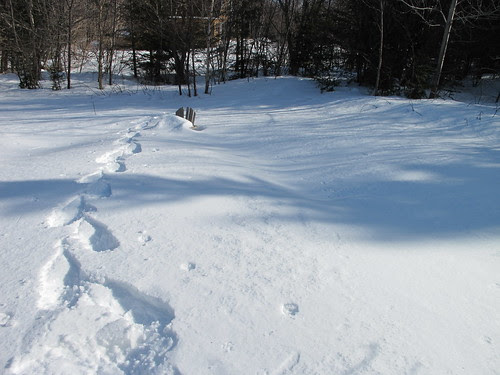 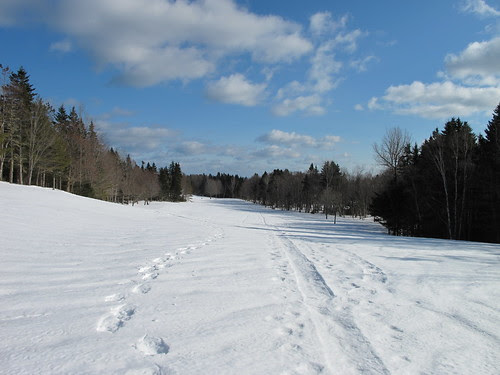 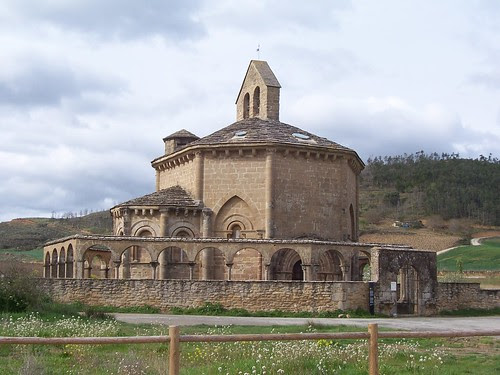 I have spent quite a bit of time this morning trying to find out why this picture of the 12th Century Octagon Church at Eunate, Spain - Knights Templar- that I took in 2008 has all of a sudden become very popular on flickr. I finally tracked it down to an outfit that calls itself the New Liturgical Movement, which is an oxymoron be cause this new movement is trying to drag the Catholic Church back into the era of the Latin Mass. My photo is so popular because someone posted a link to it is his comment on this article on the movements website.

I'm going to the top. 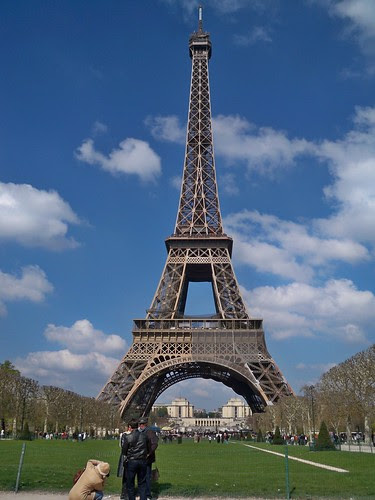 I've been buying tickets for museums, Paris Metro, London Tube and trains this week and this evening I bought a lift ticket to the top of the Eiffel Tower. The rest of these places could all take lessons from the Eiffel Tower with some there was free delivery with others I've paid as much as 14 Euros delivery charges. With the Eiffel Tower you pay for your ticket and print it yourself.

I'm going to the top of the tower at night to see the City of Light spread out before me. My friend Pru tells me that the tower twinkles for ten minutes on the hour each night, I've never seen that before either and hope to get a photo or video clip of it.

This photo was taken on a visit a few years ago. 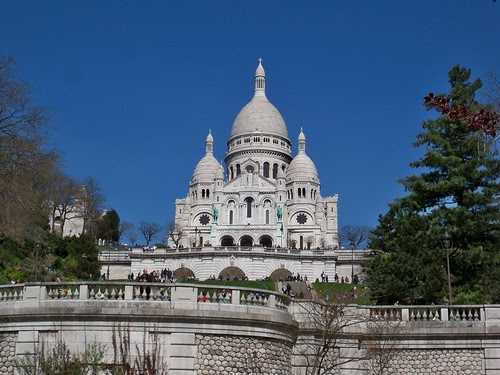 Counting the days until I will be back in Paris, in early spring. Travelling with a small group of friends we will spend a few days in Paris before moving on to St. Malo and Mont-Saint-Michel on la Manche (English Channel) after several days there we will take a ferry to the Channel Islands for a week or so. My friends will return home after the stay in the islands and I will fly to London for a few days before I return home in mid April.

When I'm in Paris I stay at a little Hotel on Boulevard de Magenta I think this will be the 5th time that I've stayed there. It's just a small 2 star family run Hotel but I love and it is so well situated, within a five minute walk of two large rail stations the Gare du Nord and the Gare de l'Est and all of their metro connections, the Hotel de l'Europe Paris. This section of the city is called Montmartre and is only a short walk from the Beautiful Basilica de Sacré Coeur. 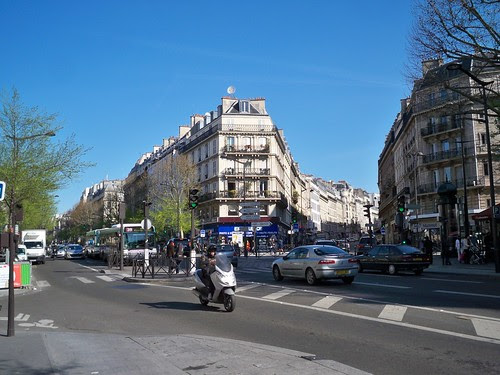 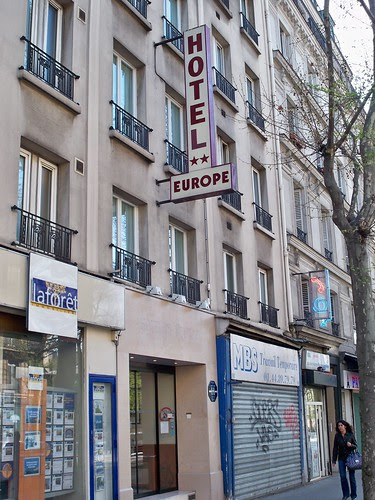 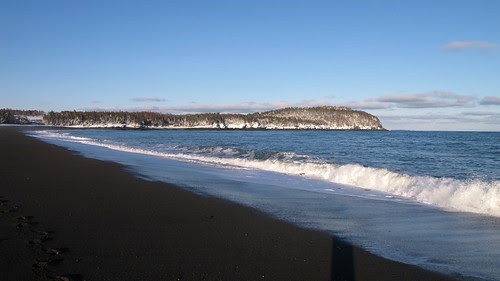 A mild day after the storm yesterday afternoon I walked Herring cove beach which was nice once I managed to climb the mountain size snow bank to get to the beach. It was the first time I was able to walk bare headed in a long time. Unfortunately we have more snow forecast for Saturday and next Tuesday. 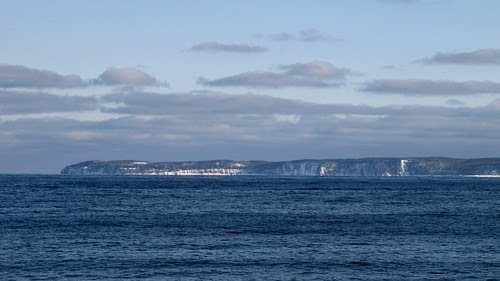 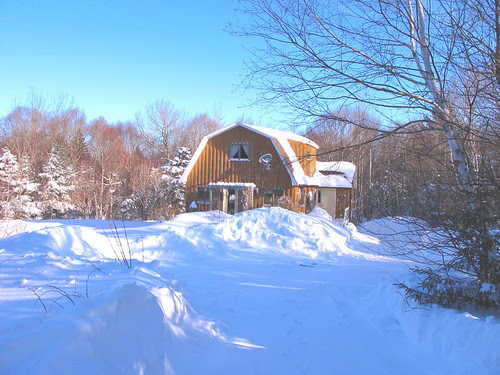 And then it snowed again.........., originally uploaded by Campobello Island.

I running out of space to put this stuff. If you can't beat it join it, I ordered a pair of Snowshoes this morning. Haven't had any in years now but the will come in handy even to get around my property. I like to go out to the compost pile in the hidden garden and that would be very hard after this last storm there is over a meter of snow the whole way out there and it is a fair distance. I used to enjoy snowshoeing around the golf course so I will be able to do that again too. 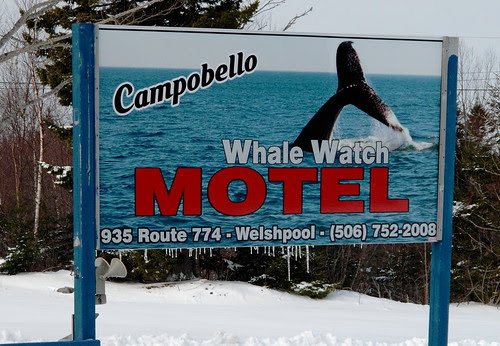 Summer and Whale Watching seems part of the distant past today we are in the midst of a major winter storm. High winds and lots of snow which is suppose to last through the day and most of tonight.

I opened my front door and put some fresh bird seed on the snow and within a minute there was a flock of birds coming and going and fighting over the meal. 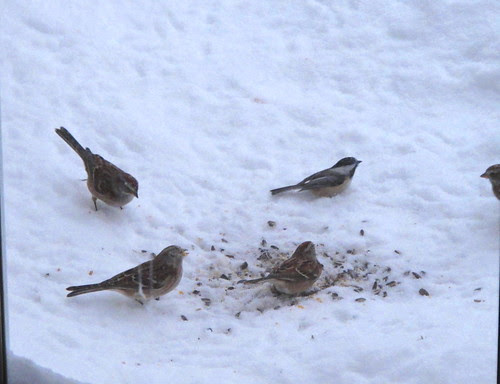 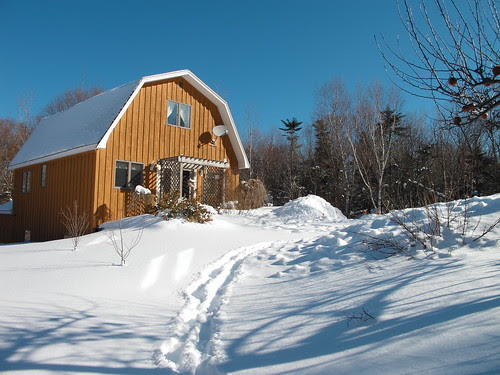 No end in sight we seem to be in an unending storm pattern with a snow storm every three or fours day. We are in for an additional 20 to 30 CM today with high winds to go along with it. The men who plow driveways are making a fortune this winter, unfortunately I'm on the loosing end it costs me $20 per storm. H heck of a lot easier than doing all that shovelling though. 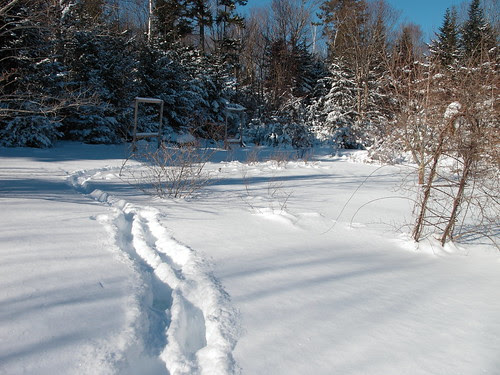