Eureka Ginger is on the roost with everyone else 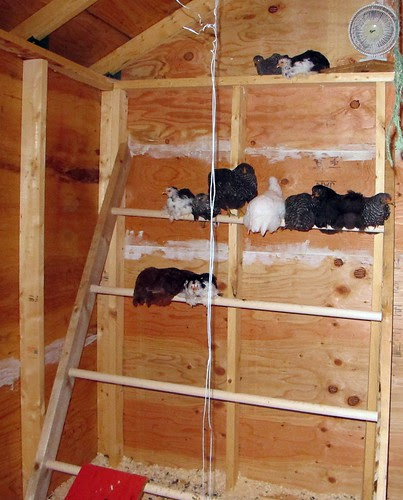 Eureka Ginger is on the roost with everyone else, originally uploaded by Campobello Island.

I'm pleased to report that ginger was able to get up on the roost tonight with all of the other girls. I put a little makeshift ramp up to the bottom rung but I'm not sure that she used it. I will leave it there for a while just in case she needs it. Also as you can see we are now roosting on three levels Ginger and a friend on the third roost, eight more on the fourth roost and two of the bantams have out smarted everyone they have gone to the top of the wall next to the fan which is running. Maybe they like the breeze.

This time lapse was taken between June 29, 2011 and July 18, 2011. The camera was watching one of the six mounds in my First Nations Style three sisters permaculture garden. During that time span the mound was attacked twice by raccoon the first attack tore down one of the two large corn plants and the second attack last night got the other corn plant so I decided to end the time lapse experiment at this point. Obviously I'm not going to get any corn but the pumpkins, squash and beans are still struggling on so there is still hope for a harvest of some sort. I will keep you updated on the progress. Hope you enjoy the time lapse.
Posted by Dale at 11:48 AM No comments: