Last of the cucumbers pickled and the last of the tomatoes canned. 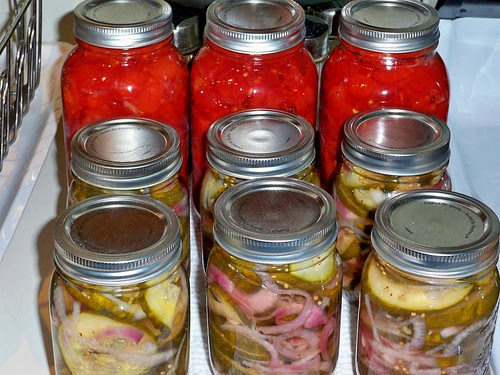 Last of the cucumbers pickled and the last of the tomatoes canned. , originally uploaded by Campobello Island.

This years canning is almost finished just a couple more things to do the cranberries and the apples both of which wont be ready to pick until we have a a few frosts in early October.

The grow bag garden has been quite successful especially in my little greenhouse. I only had two hybrid greenhouse cucumber plants and they produced enough cucumbers to make three batches of pickles, one batch of dill and two batches of sweet bread and butter, and that is besides having a steady supply of cucumbers for salads and sandwiches since mid July. There were six tomato plants in the greenhouse and they did very well, mid August before I started getting ripe ones but there has been a good supply since then and I have four quarts canned for pasta sauces this winter. I had another dozen plants in grow bags in the garden but after the five weeks of rain in late June and all of July they were hit by a blight and died along with my potato plants. I didn't get any tomatoes off them and potato harvest was very small, but tasty.

Posted by Dale at 12:06 PM No comments: Links to this post